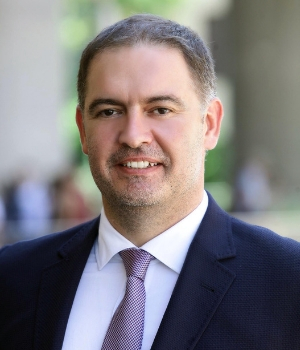 Alexandros Vassilikos was born in Athens, Greece in 1976 to a Greek father, a self-made hotelier and business man, and a French mother, a homemaker and active member of the French community in Greece. He was raised in Athens and attended the French-Hellenic school with a very diverse group of peers.  He holds a Masters’ degree in Economics and Finance, having split his student years between Nantes, France and London, UK, thanks to the Erasmus programme. He got married in 2007 and today him and his wife have two sons and a daughter.

Alexandros officially enters the family business in 1998 on his way to becoming a second generation hotelier. At the age of 24, he is appointed COO of AIROTEL Group, actively contributing to establishing the group’s policy.

By the age of 25 he assumes the lead of AIROTEL Group as CEO after the sudden loss of his father. With the Athens 2004 Olympic Games in view, he immediately drives the group into a modernization period by fully renovating the three assets of the company in Athens and purposefully revamping its identity on the market, thus placing the group on another platform. Despite the critical economic environment that ensued in Greece, he manages to expand the chain further by doubling the company’s assets in the city of Patras and adding a long term lease in the city of Kavala. Airotel Group now accounts for six hotels and more than 500 rooms on the Greek territory and is considered one of the leading city hotel chains in the country.

Seeing the potential for growth in Greek summer residences, under Alexandros’ chairmanship, AIROTEL purchases more than 20 houses across picturesque mountain villages of south-eastern Crete. These houses are then refurbished and sold in an international market.

Moreover, in 2007 Webotel SA is founded, a company dedicated to the online representation of hotels in Greece.

In parallel to his professional obligations, Alexandros Vassilikos has been working intensively within the country’s hotel unions from early on. He was elected President of the Athens – Attica Hotels Association in 2012 after serving as secretary general of the same organization for four years. He successfully represents the hoteliers of the Greek capital in crisis during a very strenuous time for the country’s tourism industry and economy as a whole. He pioneered a series of initiatives aiming at the collaboration of parties involved for the “resurrection” of Athens as a destination. During that period, he also served the industry at a national level in different roles such as Member of the Executive Council and Vice-President of the Hellenic Chamber of Hotels and Superintendent of Public Relations of the Panhellenic Federation of Hoteliers. He was also a Member of the Board of the Association of Greek Tourist Enterprises (SETE) from 2011 to May 2017.

In January 2018 he resigns all former positions after being elected President of the Hellenic Chamber of Hotels, the youngest person ever to hold this position since the creation of the institution in 1935.

Finally, being a French national, Alexandre was also appointed economic adviser to the French Embassy in Athens in 2008, a position he actively holds to this day.