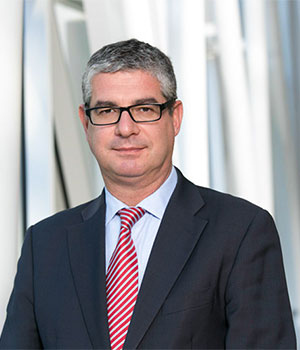 Ioannis Tsakiris holds a BSc and an MSc in Mining Engineering from the National Technical University of Athens and an MBA degree from the Management School of the Imperial College in London.

He started his career in 1995 in S&B Industrial Minerals, a European major industrial minerals producer where he spent 5 years in production, marketing and sales in charge of new products.

From 2000 to 2006, he was Partner in Vectis Capital, a venture capital firm based in Athens with an investment focus in Greece and the Balkans.

He joined Europe Investment Fund in 2006 as a Principal involved in certain European venture capital markets that were under development phase. Then he continued as Head of Region in the Regional Business Development Division, responsible for South-Eastern Europe and Head of Unit for Special Programmes in the Institutional Business Development Division. He is currently Head of Division for South-eastern Europe and EU Neighbouring Countries in the Mandate Management Department.

He is Chairman of the Board of Directors of the Global Energy Efficiency and Renewable Energy Fund (“GEEREF”) which is an innovative public-private Venture Capital fund of funds catalysing equity capital into clean energy projects in developing countries and economies in transition.

He is also an adjunct professor in Venture Capital in the Luxembourg School of finance for postgraduate studies.