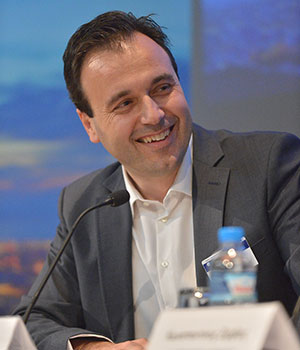 Dimitris Papastergiou was born in Trikala, in 1973. He studied Electrical Engineering and Computer Engineering by choice and because of his love for electronics, programming and broadcasting. He also attended journalism courses.

Dimitris believes that the road of participation is one-way if we want to change our life, and that’s why since he became 29 years old, he got involved with municipal projects and initiatives.

At the same time, he designed and constructed several energy projects, in the private sector.

In 2014, as Head of the political party “Restart Now” Dimitris was elected Mayor of Trikala.

He is a member of the Board of KEDE and Chairman of the Committee on Development, Innovation and Entrepreneurship. One of his main goals, is to make really smart and viable Greek cities.

He commutes everywhere by bike, because it’s a way of life.