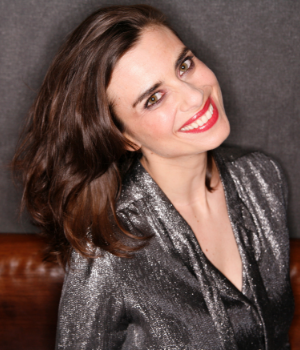 Soula Parassidis is an operatic soprano, flautist, moderator, and cultural influencer in the world of classical music. She made her debut in 2008 with the Czech Philharmonic Orchestra, and, since then, highlights of her singing career include appearances in Theater an der Wien, Bordeaux Opera, Taipei Symphony, Festival Aix-en-Provence, Guangzhou Opera, Oper Leipzig, Berlin Philharmonie, Teatro Massimo Palermo, Orchestre National du Capitole Toulouse, RTE Dublin and many others. Her performances have been broadcast for millions of people on ARTE, RAI, Radio France and the BBC. She has also appeared as a moderator for Medici TV, the world’s leading classical music channel. Soula holds a Bachelor of Music from the University of British Columbia, 2005.

As a fluent German speaker, she specializes in the operas of Richard Strauss and Wagner. In January 2019, with her husband and tenor colleague Norman Reinhardt, she created Living Opera, an online platform that equips and empowers emerging singers with real information about what it takes to build a successful career in opera. Her practical advice and techniques for public performance, preparation and mindset have extended beyond helping artists, and are also being used by professionals and academics alike. She has received awards and honours such as the Prize ‘Metropolitan Opera National Council Auditions’ and the ‘Professional Development Grant Canada Council for the Arts’.

Soula is passionate about changing the landscape of the classical music industry by planting project creation hubs, finding creative funding strategies, and unexpected cross-cultural exchanges that integrate several sectors of society. She believes it all starts by instilling an empowered entrepreneurial mindset in artists.